Dean of the School of Public Administration 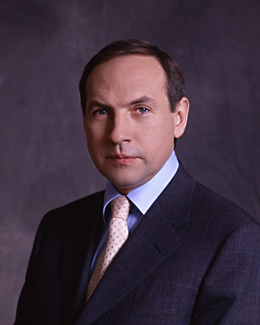 Vyacheslav Nikonov is a prominent academic and historian, an expert in public administration, and an experienced politician. His academic interests include the history of the United States, international relations, geopolitics, political science, Russian history and contemporary Russian politics.

Vyacheslav Nikonov is the author of more than 1000 publications, including 400 academic works. He holds honorary doctorates from the University of Edinburgh, Varna Free University, Transnistria State University and the China Center for Contemporary World Studies, and is a member of the International Institute for Strategic Studies (London).

Vyacheslav Nikonov heads a number of Russia-wide organizations whose purpose is to coordinate research on issues concerning international relations. He is the Chairman of the Executive Board of the Russian National Committee for BRICS Studies (RNC BRICS), Chairman of the Russian National Committee of the Council for Security Cooperation in the Asia Pacific (RNC CSCAP). In these roles he leads Russia’s delegations to the annual conferences of the BRICS Experts Council and CSCAP meetings.

As an authoritative specialist on international affairs, Vyacheslav Nikonov is a member of the Academic Council of the Ministry of Foreign Affairs of the Russian Federation, serves as Chairman of the Management Board of the Russkiy Mir Foundation, created by a Russian presidential decree in 2007 to support programs for promoting Russian language and Russian culture. At present Vyacheslav Nikonov is a Chairman of the State Duma Education Committee and a President of Polity Foundation. Since 2018 Vyacheslav Nikonov hosts “The Grand Game” socio-political TV-show dedicated to Russian-American relations and current political situation.

Vyacheslav Nikonov has been awarded with many national awards and has on multiple occasions received special notes of acknowledgement from the Russian President, Speaker of the Federation Council and Speaker of the State Duma.